Open Carnival - Everyone welcome - No need to be registered with an Athletic Club. 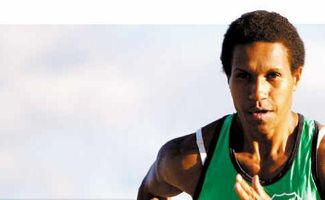 IN Papua New Guinea, sprinter Toea Wisil is a national idol. She’s on the front cover of a phonebook and admired widely by children.

While she’s shy and small in stature, she is fast. She even played rugby with the boys to improve her skills.

As Wisil prepares to represent PNG at her second Commonwealth Games in October, she is coming to Ipswich to race.

That will be at Limestone Park on August 29 when she competes in the 29th annual Ipswich Winter Carnival.

She will be the first international competitor to line up in the 100m Ladies Gift at Bill Paterson Oval.

While athletics fanatics like Ipswich club official Vic Pascoe are excited about her entry, the major benefit will be for regional competitors taking on Wisil and seeing her run.

“It’s huge for the event, to finally get an international here to run,” Pascoe said.

“Hopefully it’s the start of bigger things to come.”

Wisil, 22, is using the Ladies Gift as part of her preparations for the Games in India.

“I love my athletics. My favourite sport is athletics,” the quietly-spoken sprinter said.

As she went through a few short sprints in chilly conditions at Limestone Park, her Beenleigh-based boyfriend Aaron Daley spoke proudly of her achievements.

“This year she’s been to California and went to the University Games over there and won a couple of races,” Daley said.

“She loves running. It wouldn’t matter if it was a race between two telegraph poles. If there’s people there, she’d run.

“She’s getting stronger and the way she looks after her body is unbelievable.”

As PNG champion, Wisil has qualified for the 100m, 200m and 400m at the fast-approaching Commonwealth Games in Delhi.

The Highlands-based athlete also represented PNG as an 18-year-old at the 2006 Commonwealth Games in Melbourne.

Although her times weren’t good enough for her to make the final, she has continued to improve, covering the 200m in 23.7 seconds on her successful Californian trip.

“She is actually one of the most famous people in PNG,” Daley said.

“She’s on the cover of the phonebook. She’s well known.

“She used to play rugby with the boys a couple years older than her.”

The PNG visitor smiled and waved.

“When I finish running. I want to be a coach,” Wisil said. “I love to work with the kids and have fun.” 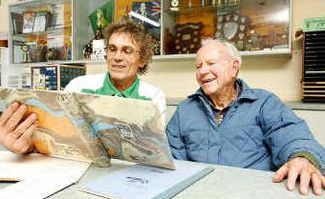 HIS memory is fading, his speech is slowing and he feels the cold more these days.

But 92-year-old Ipswich athletics pioneer Bill Paterson still looks fit enough to jog around the oval named after him. As he sits inside the athletics clubhouse to escape the chill, Bill is content. When the talk moves to athletics, he gestures excitedly with his hands and regularly chuckles. His brain is racing faster than when he used to set Queensland records over 440 and 880 yards. While his stories are fragmented, Bill grins at every question, nodding his approval at how many elite athletes Ipswich has produced.

It’s been years since he last coached. But his passion for athletics remains sharp.

The respected former coach – once dubbed “Mr Athletics" – grew up at Raceview in the days when homes had no power and ice was delivered.

Ipswich-born Bill has been at the Gold Coast for 28 years, after a 64 year stint in the city.

“I got knocked about in soccer," the former Raceview Royals and Blackstone Rovers centre forward said. “I had to give it (soccer) away because of my running."

In 1937, Bill won the Australian quarter-mile title at Hobart. He represented Queensland again in 1938. But it was in coaching where he left his legacy. He mentored up to 30 people at a time, in Brisbane and later at Limestone Park.

Among those was long-serving Ipswich athletics official and coach Vic Pascoe. It was Pascoe – another athletics fanatic – who invited Bill home. In May, Pascoe had joined Bill for his 92nd birthday at the Gold Coast.

“For four hours there, we never talked about anything else but athletics," Pascoe said. “It was fantastic."
Back in Ipswich, the pair continue another marathon chat. Surrounded by athletics memorabilia, Pascoe waits on Bill’s every word, anxious to learn more. They communicate like long-lost friends.

Being a 400m Queensland and NSW champion in 1973, Pascoe relates well to the master coach. Reliving the past is fascinating, with clippings on the table joining missing links.

One old article – still in good nick like Bill – shows the day in 1979 that the oval at Limestone Park was named after him. At the time, Alderman Kev Dwyer and Ipswich City Council wanted to recognise Bill’s voluntary efforts. The former miner and Railways workshops employee struggles to recall that day. But he again nods his approval with the grin of a gold medallist.

He looks at his scrapbooks – kept in an old suitcase. They contain a treasure trove of fine Ipswich athletics history. Bill used to run for the now-defunct Ipswich Harriers before switching to the Christian Brothers Club in Brisbane. But he never strayed far from Ipswich. Seeing Bill brave the cold outside and stand next to the sign carrying his name was a memorable way to end the chat. He could probably still coach if he had to. But living legends like Bill Paterson deserve quieter days.
_________________
"Let's Go While We're Young"

IF the finishes in Sunday’s Winter Carnival feature finals are as thrilling as last year, Ipswich athletics official Vic Pascoe will be a happy man.

In an equally enthralling 100m Ladies Gift, Ipswich runner Saleena Roberts lunged on the line to win in 11.41 seconds. She was just 0.13 seconds ahead of second placegetter Emilie Welch.

Pascoe yesterday confirmed at least 36 runners for the men’s handicap event and more than 18 competitors keen to contest the women’s series.

That includes Papua New Guinea’s leading sprinter Toea Wisil, who was planning to use Sunday’s race as part of her preparations for the Commonwealth Games in October.

Wisil is the first international runner in the Ladies Gift.

However, Ipswich’s premier handicap races have a fine tradition with two women previously winning the men’s Lightning Handicap. They were 1995 victor Laura Kennedy (in 11.1 seconds off 22m) and Penny McCoy (in 11.3 seconds off 21.5m) in 1998.

Anthony Scott and Stacey Taurima deadheated in 1993. Scott ran off 8m and Taurima started off 5.5m that day.

Previous Ipswich competitors to collect first prize in the Ladies Gift include inaugural winner Stephanie Hillier, who backed up to win again in 2005.

“It’s excellent stuff,” Pascoe said of Ipswich’s growing reputation in handicap racing. “It will be wonderful to have more photo finishes.”

The Ladies Gift final is at 3.30pm with the Lightning Handicap final set down for 3.50pm. Heats start at 11.30am and noon respectively.

Fields will be released later this week. 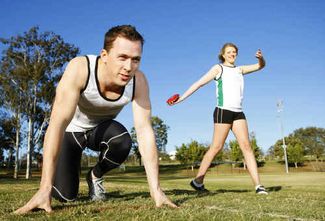 This time last year, she set a personal best in the discus, providing a launching pad for the season.

This year, the 15-year-old Ipswich and District Athletic Club regular is feeling even more relaxed.

She recently won the 16-17 years and 18-19 years discus finals at the Down Under meeting on the Gold Coast – after working hard on her strength and technique for four months in the off-season.

“I feel stronger now. I feel more power in my throws,” Hamer said, preparing to compete in the under-18 and open discus events on Sunday.

“It’s just getting the technique right and it will come together and be really good.”

At last year’s carnival, she threw 39m in the under-18 discus before also winning the open event. She went on to better that with a 40.13m throw at the state titles later in the season.

Having qualified for the under-18 national titles in March, the Lowood State High School student is excited about the months ahead.

She’s hoping her recent modified weight sessions, push-ups and squats with coach Mick Moore have her in even better shape.

“Next year (at nationals), I want to medal there and hopefully come first again,” she said.

“I’m just going in the Gift. I’ll put all my focus on that,” he said, having trained two nights a week with coach Vic Pascoe.

“I was always a little bit quick playing touch football and stuff.

“Some people mentioned I should get into sprinting so I thought I’d take it up.”

While new to handicap racing, he’s excited about Sunday’s event.

“I’m still fairly new to it. I’ve got some nerves around it,” he said.

However, the well-travelled 24-year-old welcomes the challenge having made state and national titles in long jump and relay during Year 12 in Newcastle.

“I thought, while I’m young, I might achieve something and it’s possibly a talent so I started working towards it,” he said.

“I will probably continue to do it for the next five or 10 years and try to get to a peak.”

Schedule: Track and field events from 11am. 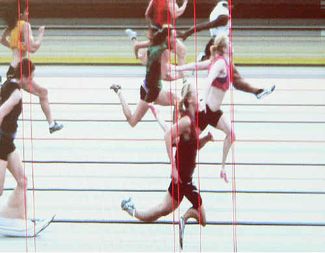 IPSWICH Lightning Gift winner Mitchell Delacy is keen to get noticed in his bid to secure an American scholarship.

He took a giant stride forward in his goal with a confident victory at Bill Paterson Oval on Sunday.

With a distinctive haircut and personality to match, the 16-year-old backed himself all the way through Sunday’s heats, semi-final and final.

“That was really good – my first time in a big race that I’ve won,” the Sunshine Coast athlete said.

With a handicap of 15m, the year 11 student thought he could win with about 10 metres to go.

His next mission is the Noosa Gift in October, another handicap race.

“I’m trying to get through to nationals and get a scholarship in America,” he said. “I just want to be picked up really.”

His “hair-raising” effort contributed to his longer-term plan. “I think people will notice . . . (they will say) he’s the only one with the mo-hawk,” the teenager said.

Meanwhile, Ipswich and District Athletics Club newcomer John Hardy was encouraged by his fourth placing in the final.

He reached the top eight out of 40 runners from six heats.

“There were a few boys in front of me. It’s a bit intimidating,” he said.

“I was a little bit nervous in my first race but I’m happy with four months of training to come fourth.”

The RAAF Amberley traffic controller wants to see how far he can progress in competitive sprinting.

“It gives me a bit of a heads-up what to expect from racing,” he said, “where I need to put more into as far as training goes.”

The $2000 Ipswich Ladies Gift final was full of drama.

“After thinking I’d won it, it’s a bit of a letdown,” Hearne said.

However, the University of Queensland club athlete was heartened by her best finish on her third attempt in the annual Ipswich race.

She is hoping to compete at national titles in sprinting and possibly hurdling.

“I’ve just come back from injury so I just want to get back to where I was,” she said. “I got better with every race.”

Wisil was thrilled to finish off a top day’s racing with a late surge.

“It was good. I expected to win,” she said, preparing to represent PNG at the Commonwealth Games in October.

Wisil planned to put her winnings towards training gear.

She was fourth in the ladies final and seventh in the men’s final.

Boosted by an excellent off-season, she produced three throws better than her old personal best of 40.13m.

Country and Western singer Matti Biskit played on the day.