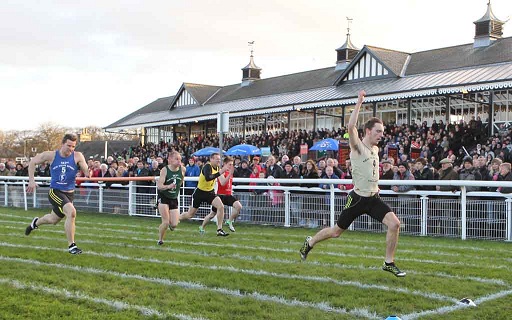 The Lang Toun produced one of the most convincing winners in modern times when Graeme Lister, the 1-3 favourite, captured the £4,000 first prize for the 143rd New Year Sprint with a margin of almost five metres over Borders student Seb Harrison (Jedburgh), with William Martin (Glenrothes) third and early favourite Keiran Reilly (Edinburgh AC) fourth at Musselburgh Racecourse yesterday.

For Simpson it was a second victory in a row at the New Year meeting and he insisted it was all down to his “school” training on grass at the Beveridge Park, which he contrasted with the “tartan” synthetic surfaces favoured by rival training groups.

“Graeme’s not missed a training session since we started preparing for the meeting last August and he’s made an amazing improvement – he’s found five metres,” said the former Edinburgh teacher. “It wasn’t till two weeks ago that I thought he could win the race, when I looked at the watch after a time trial and thought, ‘Oh ho’.

“I still don’t think he’s a sprinter – more a middle distance man – and I think he’ll move on to 400m or 800m,” added Simpson, who admitted he was less emotional this time than he had been when Martyn Paterson triumphed the previous year.

Lister, who did not bet on himself and was not surrounded by the usual entourage of family and friends often associated with New Year winners, was aware his training had been going well, but he himself did not believe he could win until after the heats on Hogmanay when he wiped out the betting by winning heat seven in 11.55 secs, the only person to break 12 seconds.

“I was more nervous before the first day, as I was in one of the toughest heats, and I was surprised at my winning margin. Adrenaline must have pulled me through,” he said.

Lister revealed that he had had an interesting year, having tried the Lochaber Marathon – a “bit of disaster as it took me four hours” – and a half marathon which he ran in “a more respectable 83 minutes”.

Complaints about Lister’s handicap were rife among both bookmakers and rival groups and there were dark mutterings from both quarters that they may not come back.

Certainly, the contrast between Saturday’s sparsely attended first day and yesterday’s near full house National Hunt Meeting could not have been more stark.

Bookmakers Cumbie Bowers and Peter Collins insist that they will not be back due to their very poor takings, while respected coach Charlie Affleck will tell his athletes at a meeting next week that he will not train them for next year’s meeting.

Weather permitting, the new Pitreavie Gift professional meeting promoted by handicapper Don Campbell will go ahead at the Fife Track on Sunday 29 January and, at least there, the athletes have an indoor area where they can warm up. “We were given a tent but had to stretch on the grass,” one said.

Graeme Lister from Kirkcaldy, a 25-year-old buyer for a metal company, looks like being handed a gold medal and a £4,000 cash bonus at Musselburgh Racecourse later today after being installed as the red-hot 1-3 favourite to win the 143rd New Year Sprint following yesterday’s heats.

Lister, who is coached by former Edinburgh teacher Eric Simpson, who also guided last year’s winner, caused more than a few mutterings among disgruntled bookmakers and rival training “schools” when he won heat seven of the 12 heats of the historic 110 metres handicap in a hand-timed 11.38 secs from a start of 12.5 metres.

That would have put him nearly four metres clear of the next fastest heat winner William Bates (Tullidbody), who took heat 10 in 11.73 secs off 16.5 metres.

Even a check with the electronic timings, which are bizarrely considered “unofficial” at this meeting, were of little solace as Lister’s 11.55 secs was clearly far superior and prompted the old lament “who’s gonna be second”?

The pre-heats 6-4 favourite, Keiran Reilly, a 16-year-old Edinburgh AC member who is off 11m, did not let anyone down in heat three which he won in 11.82 secs, with Lister’s training partner Francis Smith second from his start of 7.5m.

But no one believes Reilly can find the necessary improvement to challenge Lister, who will first have the cross-ties to negotiate during today’s National Hunt race meeting before his expected crowning after the final at around 3pm.

Behind Lister in his heat, and both qualifying as fastest losers, were his training “schoolmate” Billy Martin (Glenrothes) and rival Charlie Carstairs (Lasswade) who were to go on to contest a controversial but exciting final to the Pat Chester Open 90 metres handicap. “That was one of the best finals for years,” gasped Andy Sobik, coach to Carstairs, who won the race in 1985 and watched a wave of athletes crash over the line together.

At first it seemed Martin had taken the £300 first prize but then the photo verdict was announced in favour of Carstairs. “I’m in the best form of my life,” said the 17-year-old Telford College sport and recreation student, who hopes to move up to running 400 metres this year.

Carstairs has been helped in the past by Dave Goodall, coach to Ben Robbins, the talented George Watson’s pupil whose sporting career is rapidly reaching a crossroads where he must choose his main sport.

Not 16 until next October and not yet allowed in the school senior XV, Robbins showed why his speed must excite his rugby coaches by winning the Youths 90m handicap and only just failing to snatch the new 60m event on the line from Holly McKay (Jedforest).