Wiltshire win a Gift for grandpa
The Australian
10th April 2012 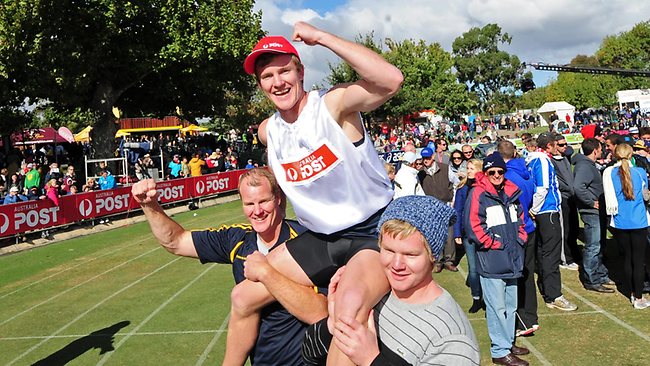 MATT Wiltshire struggled to keep his emotions in check after finally claiming a Stawell Gift triumph for his family yesterday.

His grandfather, John "Wiry" Wiltshire, had been the favourite for the 1958 Gift only to be cut down on race eve by a torn hamstring.

There was no denying the 20-year-old Wiltshire this time around, as he won the 120m handicap event at Central Park in 12.22s, ahead of Melbourne duo Doug Greenough and Adam Coote.

John Steffensen, the 2006 Commonwealth Games 400m champion, had surged to favouritism on the back of a commanding semi-final victory earlier yesterday, but he pulled up in the final after feeling a twinge in his hamstring.

By that point, Wiltshire was well on his way to a victory worth $40,000. "This is the best feeling you could ever imagine -- to win the Stawell Gift, the biggest race in Australia," said the Ballarat university student, who ran off an 8m mark in the final.

The 80-year-old John Wiltshire said he was more nervous than his grandson. "I always hoped and prayed he'd get there. I knew he had the ability."

Wiltshire had been near the top of the bookmakers' charts for the past couple of weeks.

He overcame a poor start in the final to power home, crediting his strength in the closing stages to some gruelling beach training sessions over the Christmas holidays.

A self-imposed alcohol ban this year ended last night, while a diet based largely around tuna and vegetables was also set to be put on hold. "It's horrible stuff -- I don't want to be eating that again," he said. "Give me some KFC and I'll be all good."

Ballarat's Wiltshire on a mission for grandfather

He went to Central Park as the favourite.

Unfortunately for Wiltshire and his supporters, his quest was shot down by a torn hamstring.

He succumbed to the injury in a heat of the 75 yards – now known as the Arthur Postle 70-metre Handicap.

Wiltshire is hoping his grandson Matt can achieve at Central Park today what he never had the opportunity to attempt.

Like his grandfather, Wiltshire ventured to the first day at Stawell on Saturday as a favourite, but unlike that fateful day 54 years ago everything went to plan.

Scratching from the 70m heats to allow him to fully focus on the Stawell Gift, 120m, Wiltshire lived up to expectations by breezing to victory in the eighth of 21 heats in the one of the fastest times from eight metres.

His desire to achieve what eluded his grandfather was among the first things Matt Wiltshire spoke about after his heat.

Wiltshire said he would love to win a Stawell Gift sash for his grandpa.

“It means a lot with him having so much history here, so it makes you want it a bit more,” he said. “He’s pretty much given me all the natural talent which is why I’m a good runner I suppose.

John Wiltshire is regular in the grandstand at the Stawell Easter Gift Carnival.

The 80-year-old, who is a Ballarat Athletic Club life member and still officiates as a judge at the Ballarat Gift each year, said he had only missed Stawell once since his running days. That was to attend Australian Brass Band Championships.

“We hope he can find a little bit more, but you never know in this game.”

Although he missed out on a sash in his professional athletics career, John Wiltshire has watched two generations win support events.

His son Stephen tasted victory in the backmarkers’ 400m in 1980 and Matt took out the novice 100m last year.

Seeing Matt win the big one today would be something special though.

Wiltshire began the day as the equal $3 favourite and his run was enough to retain a spot near the top of the market.