Matt Beckenham's success rate the best in the business 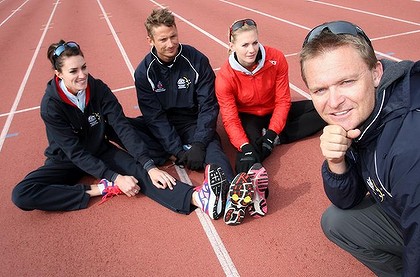 It's a strike rate that's the envy of nearly every coach in the country.

Two Olympians and a third only fractions of a second away from booking her ticket to London.

Matt Beckenham is riding a hot streak any gambler wishes they had at Vegas. But unlike the risky punter who goes all in when the odds are stacked against him, years of careful planning, honest home truths and the odd old-fashioned spat have been the basis of getting the best out of Canberra trio Lauren Boden, Brendan Cole and Melissa Breen.
Advertisement: Story continues below

Boden and Cole will run in their respective 400 metres hurdles events at the London Olympics, while Breen is hoping to join them as early as tomorrow, the national 100m champion needing to slice just 0.02 seconds off her personal best at a meeting in Japan to get under the A-qualifying mark.

''The good coaches like Matty look at the big picture,'' Cole said.

''It might mean you sacrifice some performances early on, but you get the longevity out of the athlete.

''Loz and I making the team, and hopefully Mel when she does, is a testament to his coaching.''

Beckenham's success and that of his star-studded squad isn't an overnight phenomenon.

He first crossed paths with Boden in 2002 when she was a 13-year-old while Cole and Breen joined his camp four years later. And it hasn't always been smooth sailing.

Cole's career hit a crossroads at the end of 2006 when a wakeboarding injury sustained while partying on a houseboat forced him to have a full groin reconstruction.

''We've had some rough times and disagreements about what it means to be an athlete, but the last two years we've really come together about what we expect on the track,'' said Cole, who is the elder statesman of the squad at 30.

Beckenham was a scholarship coach with the AIS in 2005-2006 before being made redundant.

That's when he started the Matty B Dept, which along with the elite squad of Breen, Boden, Cole and middle distance runner Chloe Jamieson, has 10 other athletes in the senior squad, including last year's Stawell Gift winner Tom Burbidge.

Beckenham returned to the AIS last year as a coach at the national 400m hurdles centre.

Breen described Beckenham as ''more like a big brother'' for helping get her back on track after a disappointing semi-final exit at the 2010 Commonwealth Games.

''We had this discussion in Delhi where we decided to break me down technically and rebuild,'' Breen said.

''I was very emotional at that stage, but his support is undying.

''What Matty puts into us is something you don't get from a lot of coaches.''

Beckenham represented Australia in the 400m hurdles at the 2000 Sydney Olympics.