Justin Templeton: From a desk job to manager of Kenyan's elite athletes 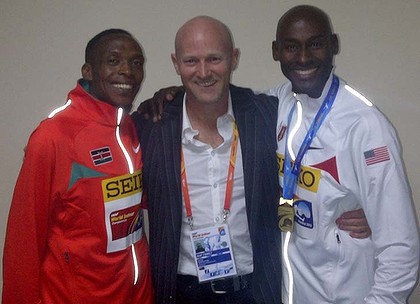 An Australian fan has discovered and nurtured some of the world's finest middle-distance athletes in Kenya.

SIXTEEN years ago, James Templeton was a financial analyst in Sydney working nine-to-five, feeding a fascination for the phenomenon that is Kenyan running on the side.

Templeton spends about a quarter of each year in Australia and the rest of it hopping between the group's European training base in southern Germany, Lagat's base in the US and, of course, the fertile plateau of the Rift Valley in Kenya's central highlands, a region famous for producing 25 world champions and four Olympic gold medallists in three decades.

How an Australian desk jockey with a passion for African athletics ended up managing the day-to-day needs of a handful of the world's best runners came down to chance and a connection that transcended cultural differences.

Templeton was asked, on the basis of a few articles he had written about Kenyan athletics in his spare time, to look after the Kenyan team travelling to Sydney for the world junior championships in 1996. Among the young group was Japheth Kimutai, an 800m runner who set a world junior record that stood for 11 years.

When Kimutai left Australia he told Templeton he had chosen him to be his manager. The Australian, with no experience in athlete management and a stable gig analysing the mining sector for the big banks, put the teenager's insistence down to impulse.

''I was saying, 'Listen, you have to be careful about this, you could have any [sports agent] that's around, whether it be a big group or a small group,''' Templeton said from New York this week.

But Kimutai was adamant. And after some cajoling, the pair travelled to Iten, Kenya, to meet his new client's coach, the revered Irish teacher-turned-running sage Brother Colm O'Connell, who staged regular running camps in between his duties at the local high school.

''He and I hit it off, I spent a couple of weeks there, and he soon appreciated that we had similar thoughts about the development of young athletes,'' Templeton says.

The pair spent the next 15 years hand-picking runners based on their potential to not just run fast but to become the very best of Kenya's prodigious athletic output. The stable never swells wider than eight, and once they're in, they're family.

''We're after the elite, we're after developing the best of the best,'' Templeton says.

''There's a certain sense among young Kenyans, they're desperate for an opportunity to get to Europe to make a living from the sport, and that's a given. But we've always wanted athletes who are driven for success, driven for medals and achievement, to become great athletes.''

The group's most successful product to date is Rudisha, the towering 23-year-old Maasai whom many predict will be the first person to run under one minute, 41 seconds for the 800m.

In the brutal environment that is the Kenyan Olympic trials, where, in any given event, upwards of five of the eight fastest in the world may be vying for two spots, Rudisha is considered a certainty for qualification and - eventually, barring injury - Olympic gold.

And it was Templeton's old friend Kimutai who found him, in April 2005.

''Japheth said, 'Oh, JT' - that's what they call me - 'you're going to be happy … we've found the guy we've been looking for. You're going to be so happy when you see this guy run,' and this was Rudisha running his first ever 800 on a dirt track in one of Brother O'Connell's camps,'' Templeton says.

Rudisha at 16 was a painfully shy boy but there was no hiding his talent.

''You [could] just see the movement … he wouldn't have been as polished then as he is now but you still got a sense of, 'Wow, this guy is impressive,''' he says. ''He [held] the head high, he [ran] in an imposing fashion. I just loved the way he moved.''

Templeton and O'Connell got to work. While the Irishman helped Rudisha refine his running, Templeton, with the help of a major athletics footwear brand, put electricity in Rudisha's high school and bought cows and a freezer so that Rudisha, as well as every other pupil, had milk to drink daily and plenty of food.

A year later, Rudisha won the world juniors and was named No.1 in the world by a respected track and field magazine.

''He got a slight groin injury before the [national] trials and we didn't put him in so he didn't go to the world champs,'' Templeton says. ''Quite possibly he could have won, but we thought it was an Olympic year the next year and we didn't want to get carried away. He was only 18.''

Rudisha was tested again in 2008, injuring his calf during the Kenyan Olympic selection trials. The bitter disappointment of those two years would turn out to be the making of the man.

''He now admits himself if he'd gone on to win the world championships in 2007 and Olympic gold in 2008, which he certainly had the talent to do,would he still be running now? He was very down about [missing the Olympics] and it's a test of character to respond to setbacks,'' Templeton says.

''Brother [O'Connell] and I like to see what athletes are made of, it's not just all on the up, it's the mark of a great athlete how you respond to setbacks.

''Do you allow your frustrations to overcome you or do you acknowledge it, settle in, bide your time, wait again, come back harder and stronger and faster the next year.''

Rudisha did wait. And he did come back harder and stronger and much, much faster. In 2010, he became the fourth man to break 1.42, joining Wilson Kipketer, Sebastian Coe and Joaquim Cruz in that elite club. Later that year he surpassed them all, breaking Kipketer's world record and going tantalisingly close to the 1.40 mark.

He now stands, in a metaphorical sense as well, head and shoulders above the rest of the field, recording a blistering win in the Diamond League in New York last weekend and signalling to the world that while Beijing was not, London will be his time.

''As Brother [O'Connell] says, 'It takes more than fast legs to become a good athlete,' and there's so much more on the mental side and the patience it takes to develop.

''A lot of young athletes in Kenya produce a lot very quickly but they can't go on with it,'' he says.

''[David] is a mature guy, he's in control of himself … it's been wonderful to see him blossom and become the athlete that Brother Colm and I thought he could.''

Rudisha is not the only tremendous athlete to come from Templeton's stable. Lagat, now an American citizen based in Arizona, who will face British favourite Mo Farah in the 5000m in London, has been with the group for more than a decade and is an important mentor to the younger runners.

Templeton says there are many factors, over and above their physiological gifts, that contribute to the Kenyans' supremacy over the middle and long distances.

''Most of these athletes come from the rural communities, they're generally from the villages, and they're not wearing shoes until they're 13, so they develop this wonderful natural strength and power in their feet and calves and Achilles,'' he says.

''They're also tough young kids, they're not pampered. They're tough but they're disciplined. [For] their parents and seniors discipline's a big thing, sometimes a brutal discipline, and they're well-disciplined at school.''

And then there is that undeniable advantage that is their physical make-up and beautifully tempered lungs and hearts. ''They're wonderful lean but strong people,'' Templeton says. ''That leanness is important, they're beautifully adapted to run middle-distance running in a way that the Nigerians are not, [or] those big, muscular, raw-boned sort of guys. And the altitude, they have a wonderful set of heart and lungs they've developed. Not everyone can run in Kenya, that's obvious, but there's seemingly thousands that can.''

So many in fact that their Olympic trials next weekend might trump the Games for drama and spectacle in the middle-distance events.

''The tension is incredible, I mean standing on the line in the 1500m last year there were nine of the top 14 in the world or something,'' Templeton says. ''It's wonderful, the ups, the downs, the surprises when someone [new] comes through, the relief when someone makes it. They're all great runners and they're all very passionate and desperate for that chance.''