PROTRACK » GENERAL » Who is Steve Solomon?

Who is Steve Solomon?

Who is Steve Solomon? 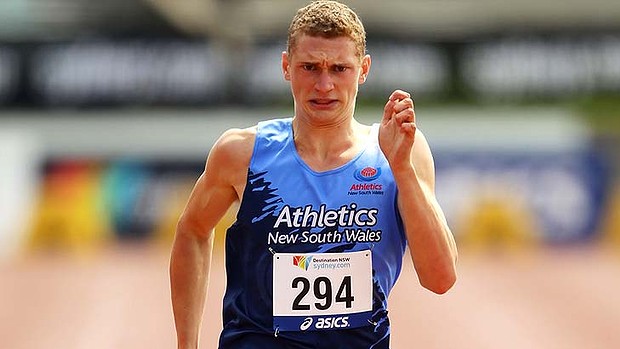 The young athlete unwittingly drawn into the John Steffensen selection saga is a rapidly improving, chocolate-loving, 19-year-old Twitter novice who has just won a bronze medal at the World Junior Athletics Championships in Barcelona.

Steve Solomon was chosen ahead of Steffensen to run in the individual 400 metres at the Olympic Games despite being defeated by the controversial veteran at the national titles.

The Sydneysider honoured a promised to join Twitter once he was selected for the Olympics, but is yet to address the controversy raging after Steffensen attacked the selection at the weekend. That was probably because he was too busy running a personal best in the 400 metres and anchoring the national 4x400 metre relay team to fourth place in Barcelona.

Steven Solomon’s father Michael told the Jewish J-Wire website from Barcelona: "He so much deserves the medal. He worked so hard at getting this result and we could not be happier for him.

"The Olympics is a dream come true, what more can we say. In two-and-a-half years he has gone from winning a school competition to winning a bronze at the world juniors and now an Olympian too.”

Solomon himself is thrilled by his current form.

"It was a new personal best, in a world championship final, after running two quick rounds. The bronze medal was the highlight. It shows true value and acts as a recognition for all the hard training and preparation both my coach and I have put in."

Athletics identity David Culbert tweeted that Solomon is "pretty fly for a white guy" following his selection. He told SEN radio that Solomon is "the future" for Australian athletics, saying "he is in the best form of his life".

High jumper Brendon Starc describes him as an "amazing athlete and all round top bloke."

A former soccer and rugby player as a child, Solomon was captain of the Australian junior football side at the 2009 Maccabiah Games.

Solomon didn't receive any formal athletics training until 2009, despite starring in school sport as a teenager. In 2010, he broke a 27-year-old 400 metres record at the Australian All Schools meet.

He has knocked more than a second off his best time for the 400 metres since 2010, his personal best now 45.52, achieved in his bronze-medal winning effort in Spain four days ago.

His run for the relay team yesterday was estimated at 44.6 seconds.

Lauded within the Jewish community and named the Maccabi NSW Junior Sportsman of the Year, he made Australian athletics notice his talents in 2011 when he won the 400 metrs at the Melbourne Track Classic at Olympic Park, defeating a high-class field that included Steffensen and Commonwealth Games silver medallist Sean Wroe.

Solomon is keen to study medicine at Stanford University as his father did.

Steve Solomon is an unfortunate victim of Steffensen


The blow-up surrounding John Steffensen’s non-selection for the individual 400m event at the London Olympics has made an unfortunate target of Steven Solomon.

Solomon is the runner Athletics Australia chose to select ahead of Steffensen, despite neither athlete making the required A qualifying time.

Now, whether you agree with Steffensen’s stance or not, or the decision of Athletics Australia, Solomon has done nothing wrong.

Steffensen may be used to all the media spotlight and the headlines, he may even enjoy it, but I don’t know that for a fact. But the 19-year Sydneysider will not be used to this kind of scrutiny or harsh criticism.

Solomon is one the rising stars of the Australian track. He announced himself on the local stage with a win at the iconic Melbourne Track Classic in March last year. There he took on the might of Steffensen, Ben Offereins, Sean Wroe and Kevin, Australia’s Commonwealth Games gold medallists, and beat them all.

It was a surprise at the time because Solomon was a late bloomer had only started athletics as a teenager.

His meteoric rise including winning the Australia All-School titles, a place at last year’s World Championships and posting a career-best time at the World Junior Championships in Barcelona last week.

Solomon has talent to burn and stands apart from the normal athlete – he is polite and highly intelligent.

He is the son of an orthopaedic surgeon and plans to become a doctor himself one day. He grew up idolising the feats of Cathy Freeman and Jeremy Warner.

I interviewed him last year and he struck me as a well-grounded, easy-going but dedicated young man. Greg Meaher, CEO of Athletics Australia, described Solomon as a thoroughbred and a “bloody good athlete”.

Eric Hollingsworth, high performance manager at Athletics Australia, says he is a “quiet, intelligent, unassuming character” who can “go as far as commitment and hard work can take him”.

From the outside, not knowing if racial discrimination has played a factor in the decision, it appears as though Solomon has been selected because he is a real medal chance for the 2016 Rio Olympics.

Solomon has the better recent form, has huge potential and London will be an important learning curve for him. Athletics Australia have gone for the young pup over the old dog. Steffensen has been a fantastic athlete in the past but his best days appear past him.

The whole episode has been handled badly. Athletics Australia have hardly showered themselves in gold, and this is further evidence that a broom needs to be put through the organisation and new leadership installed.

Allegations of racial discrimination should be investigated.

But if they are baseless, then Steffensen, who boycotted the 2010 Delhi Commonwealth Games because he claimed he had been let down by Athletics Australia, has some answering to do.

His threat of boycotting the London relay team is a very poor one if it is only purely based on him being annoyed at the selection of Solomon.

This 19-year old is eager to make a name for himself on the world stage.

Let’s hope Australia throws its support behind Solomon, who has made no error, at London and the youngster can shrug off the media circus and compete to the best of his ability.

PROTRACK » GENERAL » Who is Steve Solomon?