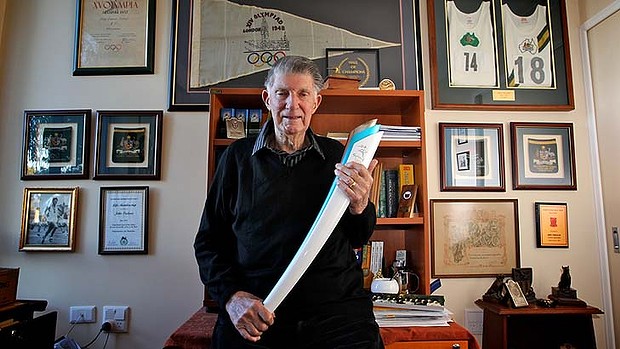 John Treloar, one of the fastest men in the world at his peak, and the first Australian to make the final of the men's Olympic 100 metres sprint, was more than a tad unlucky in the 1952 Helsinki Olympics. He was one of six runners who finished within 0.1 seconds of each other. The winner, Lindy Remigino, thrust his shoulder forward to beat three other runners who recorded the same time and Treloar, clocking the same time as the runner awarded fifth spot, had to settle for sixth.

The photo-finish system was rudimentary and there was no time for tactical planning, he said later. It was just a matter of going ''hell for bent'' and it was a great thrill for this triple Empire Games gold medallist.

One of the greatest sprinters the country has ever produced, he was part of Australia's golden age of sprinting that included Marjorie Jackson, Shirley Strickland and Betty Cuthbert. 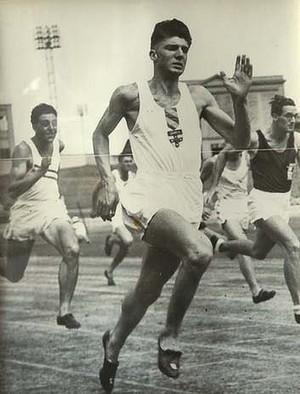 John Francis Treloar was born in Sydney on January 19, 1928, son of an engineer, William Treloar, and his wife, Dorothy (nee Oakley). He showed early athletics prowess, winning the Roseville Public School's championship aged 11. At North Sydney Boys High, he played rugby, was a fast bowler for the First XI and excelled at athletics. He went on to the University of Sydney to do electrical and mechanical engineering but kept up with his athletics. Receiving coaching to speed up his starts, he emerged to win six national championships in the 100 and 220-yard events.

Treloar was chosen for the Australian team for the 1948 Olympics in London. His parents provided a professional coach for him and sent him to the United States for special training.

Once in London, Treloar saw that the city had hardly recovered from the battering it had received from German bombs. The athletes were housed but things were rather rudimentary. There was no tailoring of food to athletes' needs. ''We were told there was a giant crate of juicy Aussie steaks on its way but they 'went missing' at Tilbury Docks,'' he said. "I seem to remember it was kippered herrings for breakfast, lunch and dinner.''

Treloar came fourth in the semi-finals of both the 100 metre and 220 metre sprints. But he was far from finished. Chosen for the Empire Games in Auckland, he won the 100 yards in 9.7s and the 220 yards in 21.5s and was part of the Australian team that won the 4x110 yard relay in 42.2s. The Australian team was triumphant, winning 34 gold medals, against second-placed England's 19.

After the Olympics, Treloar returned to engineering, working for his father in W.J. Treloar and Sons, making equipment for the petroleum and related industries. In 1951, he married a physiotherapist, Patricia Law. Treloar was chosen for the Australian team for the 1952 Olympics in Helsinki, an extraordinary Games in which the Soviet Union was making its Olympic debut. Treloar said: ''We had plenty of opportunities of getting to know athletes from all over the world, including the Iron Curtain, and to us it [the Cold War] was a non-event. But obviously, with the politicians, it was more important than that.''

Treloar continued in his father's business and made the company public in 1962. But athletics was never far from his mind. When he stopped competing, he turned his attention to administration and served a term as president of Athletics NSW, an organisation that later made him a life member. In 1987 he formed a new company that supported the LP gas industry developing strong markets in Australia and overseas.

Patricia died of cancer in 1997 and, in 1998, Treloar married a company director, Jan Bryant. In 2000, he was awarded the Australian Sports Medal and in 2001 he became an AM. Last year, North Sydney Boys High named its newly refurbished gymnasium in his honour. Treloar died suddenly in Sydney on July 23.

His son John said, ''Dad passed away exactly as he ran: quickly.'' John Treloar's funeral will be held at North Sydney Boys School today at 10am.

He is survived by Jan, his children John, Philip, Geoffrey and Patricia, two stepsons, 18 grandchildren and his brother, Hugh.