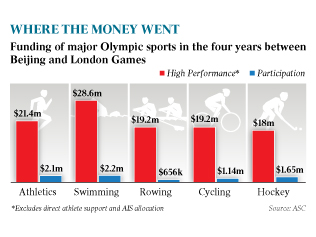 AUSTRALIAN sport will enter a rebuilding phase after the London Games, with the peak government funding body signalling it will review with every sport how public money is being spent and place greater emphasis on the development of coaches and identification of future athletes.

Mr Hollingsworth, a Rhodes Scholar and former Victorian government senior bureaucrat who represented Australia at two Olympics, said Australians should be proud of the performance of their Olympic team in London.

Although Australia won fewer gold medals than it has at any Games since Barcelona 20 years ago, it finished top 10 in the medal tally behind nations with much larger populations.

"We certainly will be looking with our sports to work out whether the money is being invested in the right way to get the right outcomes," Mr Hollingsworth told The Australian.

"That is both in participation, in terms of raw numbers, and high performance, which is not just Olympic medals.

"The areas I think you will see a greater focus on is coaching, coach development and a renewed focus on talent identification."

Mr Hollingsworth's support for a broader definition of success in sport backs a central theme of the 2009 Crawford report, which argued that funding priorities had been skewed by a preoccupation with winning Olympic medals.

Mr Hollingsworth said government funding decisions since the Crawford report had begun to address the imbalance, but it was up to individual sports to develop their own plans to meet goals.

ASC figures show that in the four years between Beijing and the London Games, government funding for high-performance programs dwarfed its support for grassroots sport. The discrepancy was most pronounced in the five largest Olympic sports of athletics, swimming, rowing, cycling and hockey, where a combined $106 million was ploughed into our elite teams compared with $7.7m into participation programs.

One sport where the ASC has already invested money to change how things are run is athletics, which suffers from a high churn rate in its junior ranks, a cumbersome competition structure and an ad hoc approach to coaching.

For historical reasons, Athletics Australia has until recently never had a formal relationship with Little Athletics Australia, which, in turn, is not recognised by the ASC. Although an estimated 100,000 kids participate nationally in Little Athletics every summer, about 30,000-40,000 of them leave the sport in any given year. To improve the poor retention rate, the ASC has funded a two-year, $400,000 joint venture to encourage athletes aged 13-15.

Little Athletics Australia president Ross Burridge said his sport was also working to reduce the length of its Saturday morning competitions and improve the standard of coaching.

Mr Hollingsworth, a former 400m runner and hurdler, said if Australia wanted to remain competitive with larger nations, it needed to "go deeper into our talent pool". He also drew an analogy with football and the way clubs manage their playing stocks between premierships.