Steve Hooker OUT for Australian season 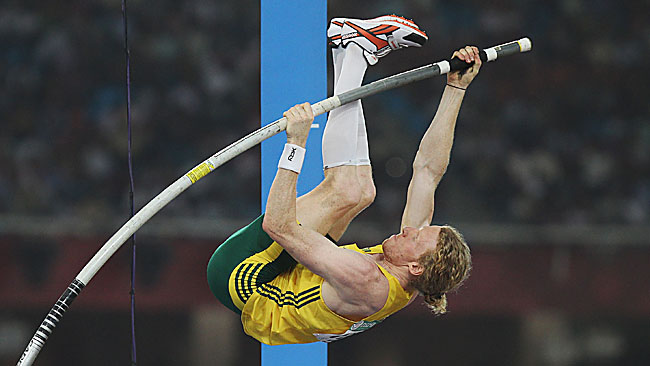 STEVE Hooker - the biggest drawcard in Australian athletics - has been grounded for the domestic season by a chronic knee injury.

The absence of the Olympic and world champion is a huge blow to the sport in Australia. He will miss Melbourne's major meeting on March 3 and the Australian titles at Olympic Park in April.

Athletics Australia's athlete agent Maurie Plant had wanted to bring out French stars Renaud Lavillenie and Romain Mesnil, who claimed the minor medals behind Hooker at the 2009 world titles in Berlin.

But the pair will remain at home, where they will be drawcards at the European indoor titles in Paris in March.

Hooker's knee, which has given him grief since 2001, became a major issue in January 2009.

"That is when his pole snapped and hit his knee," coach Alex Parnov said.

"In Canberra we met with doctors and with physiotherapists Craig Purdam and Brent Kirkbride.

"The verdict is Steve needs at least two months doing a special recovery program before he can even start plyometrics (jumping activities) and sharper stuff.

"At this stage obviously there is no chance for Steve to compete in the domestic season because the nationals are in mid-April and he cannot even start specific training until around then. It is important to get this problem fixed."

Parnov said Hooker was aiming to return in June.

"We need four to five competitions before Daegu (the world titles in South Korea in August) to prepare him best as possible," Parnov said.