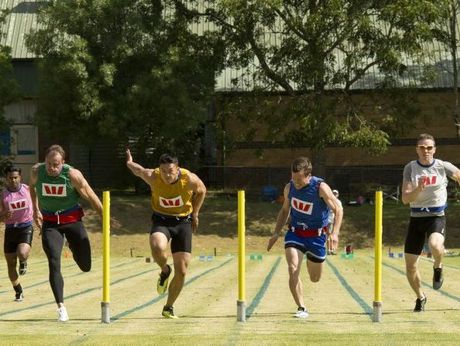 McDonald, 35, realised a long-held dream when he celebrated victory in the 15th running of the 70-metre dash, spurred on by a large contingent of family and friends.

Running off a handicap 9.5 metres, McDonald found a strong kick 25 metres out from the finishing line to outlast Andrew Chew (8.5m) in a time of 7.10 seconds.

Brisbane's Tom Quinilivan (8m) was close up in third place.

McDonald's band of supporters included his parents, John and Joan McDonald, along with his wife Annette and 20-month-old son Jackson.

McDonald moved to the Gold Coast 15 years ago where he co-owns the printing and graphic design company Copirite with Annette.

But winning the Fairholme Gift has remained a personal goal of McDonald's since the race's inception in 1999.

Today's victory had an added Toowoomba flavour about it with McDonald now training with the city's 1984 Olympic gold medallist Glynis Nunn and Leanne Smith.

"I've trained so hard for this," McDonald said.

"I set myself a goal 12 months ago to be here for this race and to win is awesome.

"I finished second here four years ago and from that moment it's been a dream of mine to come back and win it.

"To have all my family here today to share the win with me is just great."

McDonald is donating his $2750 winner's cheque to Youngcare.

Today's Consolation final was won by Joe Allen in a time of 7.30secs from veteran Toowoomba runner Wally Knock and Steve Jones.

Starting off a mark of 6.50m, Fields held on defiantly to outlast fast-finishing Toowoomba pair Josh Robinson (2.50m) and Nick Toleman (2.25m) from their back marks.