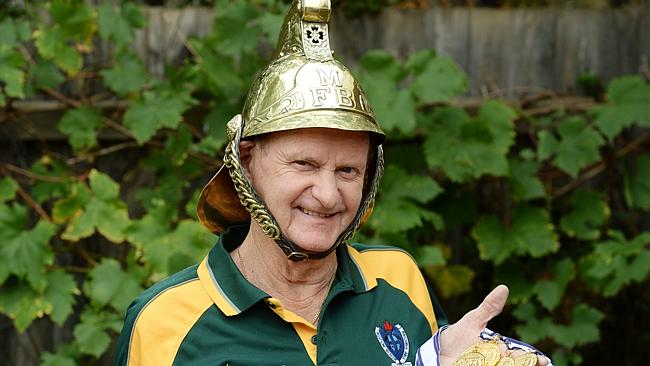 BOB Soulsby is doing his bit to keep trophy engravers and medal makers in business.

The spritely 80-year-old Hoppers Crossing man collected five gold medals at the 2014 Australasian Police and Emergency Services Games earlier this month, but this was far from his greatest medal haul at such an event.

“I won eight in the UK at the world games in 2002. And at Hong Kong at the worlds I won nine gold medals,” he said.

The former MFB firefighter has been competing in athletics all his life.

A specialist sprinter, he won the 400m final at the Stawell Gift meeting in 1972.

He has continued his love of the running track to this day, but a recent knee operation saw him restricted to field events at this year’s Australasian Games.

Soulsby claimed gold in the long jump, triple jump, discus, javelin and shot put in the 80 years and over division this month at the Albert Park titles.

Last week’s Stawell Gift was a special moment for Soulsby, who recounts being at the famous Easter athletics meet every year for the past 50-plus years.

It took judges some time to decide the winner of the main race, with Luke Versace taking the victory by less than one one-hundredth of a second over runner-up Augustine Carty-Cowling.

“That was the longest we’ve ever waited for a result,” he said.

“I can remember years ago (1947) Arthur Martin and (Doug) Gardiner dead-heated in the Gift and they had to rerun it because you’ve got to have a winner.” Martin won the run-off by six inches in a famous victory.