By Jai Bednall
new.com.au
March 14, 2016

SOUTH Africa’s Wayde van Niekerk is the reigning world athletics champion in the 400m sprint and favoured to win gold in his pet event at this year’s Rio Olympics.

But to this point of his career he was yet to do anything that would suggest he’d go down as one of the greatest athletes to set foot on a track — until the weekend that is.

Not even sprint luminaries Usain Bolt, Carl Lewis or Michael Johnson have managed to achieve the feat, which requires unbelievable adaptability.

Van Niekerk ticked the first box in his treble in Switzerland last year when he showed he was more than just a one-lap specialist by producing a time of 19.94 seconds in the 200m.

A month later he recorded the fourth fastest 400m time in history at the world championships in Beijing, becoming the first non-American man to run under 43.5 seconds with a time of 43.48.

That left the 100m, where van Niekerk’s personal best was 10.45 seconds — set way back in 2011. But helped by a legal tailwind of 1.5m/second in his home capital, the rising star of world athletics stopped the clock at 9.98 seconds to reach his childhood dream.

“Wow!!! Truly grateful and humbled by the opportunity and talents the Lord has blessed me with. Finally reaching my childhood dream of sub 10,” wrote Van Niekerk alongside a video on his Instagram account.

“Truly so blessed thank you to everyone supporting me with in my career. And all that’s contributed to where I am today!!!”

The effort drew Twitter praise from Johnson, who had previously gone closest to achieving the triple. The star of the 1996 Olympics comfortably met the marks in the 200m (19.32 seconds) and 400m (43.18 seconds) but had a personal best of 10.09 seconds in the 100m. “That’s crazy,” Johnson wrote. “Great things could be ahead.”

So does this mean van Niekerk — who will only compete in the 400m in Rio — is the greatest male sprinter in history? Not quite.

His ability to produce a sub-10 100m while focusing on the 400m is remarkable. But according to a table produced by athletics blogger Jon Mulkeen, the times van Niekerk has produced in the three events only ranks him the fifth fastest overall sprinter in history.

Using IAAF scoring tables, Mulkeen is able to produce a combined score for every athlete who has completed the 100m, 200m and 400m.

Bolt’s world record setting times in the 100m and 200m more than make up for his less impressive PB of 45.28 seconds in the 400m to leave him on top of the list.

Johnson comes in second, ahead of Tyson Gay and Yohan Blake, with van Niekerk fifth.

Lewis sits all the way down in 25th spot because of his hatred of the 400m. The 1980s superstar rarely even ran the one-lap race in college and has a known personal best of 47.01 seconds. 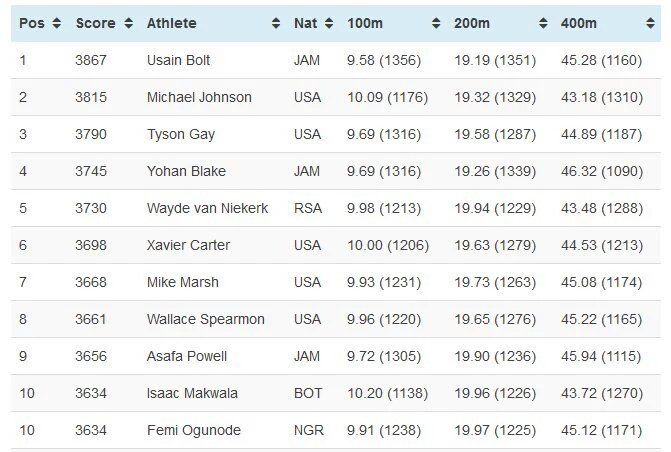