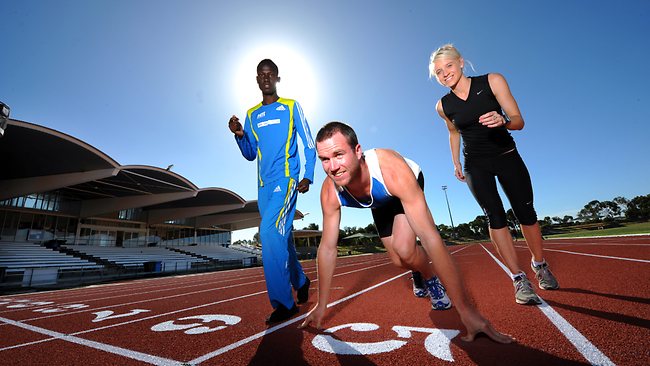 No surface tension for top runners
By Warren Partland
The Advertiser
March 04, 2011

James has nominated for the 100m and 200m double at the Strive Interclub meet in Perth on March 18 and will test his form over 100m at tonight's Adelaide Airport Invitational meeting.

Training partners Alicia Wrench-Doody, Andrea DiPaolo and Dale Woodhams have also entered the sprint double in Perth while another member of their coach Paul Young's group, James Boden, will run in the 800m.

Boden will be absent from tonight's first meeting on the resurfaced track at Santos Stadium after committing himself to the 400m and 800m at the Victorian titles this weekend.

"But until he runs on a synthetic track with electronic timing, I don't really know.

"We trained on the track on Wednesday and it is fantastic, like walking on carpet.

"My guess is the track will need time to settle and have a few meets on it before we can work out how fast it is."

The opening of the $2 million track ends a disrupted summer season for the state track and field community with athletes forced to compete on grass.

An independent inspection of the facility will be held over the next two days before it is certified for approval by the sport's governing body, the International Association of Athletics Federation.

"The new track is most definitely a boost for the sport in South Australia," Athletics SA president Tony Keynes said.

"The old track was past its use by date after 12 seasons."

Tonight's meet involves events from 100m to 1500m as well as in the field with the competition being extremely well supported on the evidence of the number of athletes entered.

Former highly promising junior Paige Graham will make her comeback tonight after several years away from the sport while Sudan-born Duer Yoa, a world cross country representative for Australia last year, has nominated for the 1500m.