PROTRACK » GENERAL » Kim Collins the backmarker for the Stawell Gift

Kim Collins the backmarker for the Stawell Gift 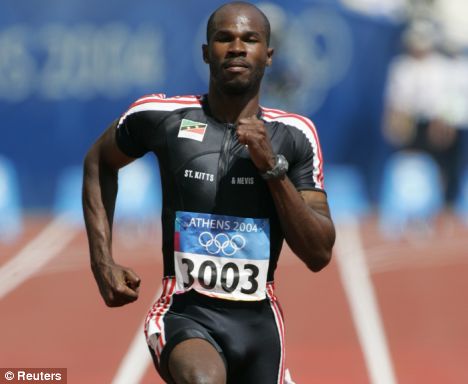 Collins to join backmarkers for Stawell Gift
By Michael Gleeson
The Age
March 18, 2011

FORMER world champion Kim Collins, who has run the 100 metres in less than 10 seconds four times, will race in this year's Stawell Gift.

When he hits the grass of western Victoria at Easter Collins will be 35, having dabbled once with retirement in 2009. He made his comeback to the track this year and has run the second-fastest time over 60 metres in 2011. The gift is over 120 metres.

Collins, from the tiny Caribbean nation of St Kitts and Nevis, won the world 100 metres championship in Paris in 2003, becoming the first West Indian to do so. He has since been followed by Jamaican Usain Bolt, the fastest man in the world and the dominant figure in world sprinting.

Collins is not running at that sort of speed, but is undoubtedly still a powerful runner who will add depth to the field at Stawell. A four-time Olympian, he has competed in the 100 metres and 200 metres.

"I have been to Australia previously for the Sydney Olympics and it will definitely be a new and exciting experience for me, competing on grass and having to chase everyone down from the back of the field, but I can't wait for the challenge," he said.

Stawell has previously attracted international sprinters including Jon Drummond, Obadele Thompson and Linford Christie. The heats for the 130th gift will be held on April 23, with the semi-finals and final on April 26.

Collins, who won the sprint event at the 2003 IAAF World Championships in Paris, has been a mainstay on the international scene over the past decade, with a best 100m time of 9.98 seconds.

He will race for the $40,000 prizemoney at the famous event in country Victoria over the Easter/Anzac Day long weekend in April.

"I have been to Australia previously for the Sydney Olympics and I can't wait to come back Down Under again to race on grass at Stawell," he said.

"It will definitely be a new and exciting experience for me, competing on grass and having to chase everyone down from the back of the field, but I can’t wait for the challenge."

The 34-year-old's appearance is a timely boost for the Gift, which was in danger of being moved last year after a sponsorship shortfall.

Promoter David Culbert hailed to return of an internationally renowned sprinter to the event.

“Central Park is no stranger to the stars of international athletics, previously playing host to the likes of Jon Drummond, Obadele Thompson and Linford Christie,” Culbert said.

"The Stawell Athletic Club have once again been able to attract an international athlete of the calibre of Kim Collins. He will be an enormous drawcard and we can’t wait to see him in action at Stawell. Along with the four world-class Kenyan distance runners, athletics fans will definitely be in for a treat."

"We’re set to put on a fantastic event, and we thank the Victorian Government, Australia Post and our other sponsors for their valuable support."

THANKS to Google Translate here's how it translates into English:

World champion in the women's 100 meters, Kim Collins will participate in the oldest and most famous competitions in Australia.

Organizers Stawell Gift, which will take place 130 times, announced participation in the launch of the world champion in 2003 Kim Collins of Saint Kitts and Nevis.

Collins is one of the most consistent sprinters of the last decade. Kim's personal record - 9.98. Sprinter will participate in the struggle for 40,000 dollars, which will be played at the Stawell Gift during the Easter weekend.

"I was in Australia, when he participated in the Olympic Games of 2000. I can not wait until I return to this country to start on such unusual for me to compete as a Stawell Gift. First, it will run on the grass, and secondly, from my rivals will be handicap, since the organizers want to ensure the participants were relatively equal chances of success. So my distance will be longer than everyone. "

The arrival of 34-year old athlete will be a timely support for the competition, which could conclude the existence of the loss of sponsors. By the way, along with Collins and perform four very strong Kenyan distance runner.

Kim Collins is not the first well-known sprinter, reshivshiysya act for him in unusual circumstances. Earlier in the Stawell Gift fled Jon Drummond, Obadele Thompson and Linford Christie.

Collins might struggle to catch Aaron R-S on that run.

Former world 100m champion Kim Collins has been turning back the clock on his illustrious athletics career.

Collins, from the tiny Caribbean island of St Kitts and Nevis, will take on Australia's best sprinters in the historic Stawell Gift this weekend.

The 35-year-old came out of a 16-month retirement in January and showed he'd lost none of his blistering speed as he clocked a personal best and the second-fastest time of the year at an indoor meet in Germany.

The Stawell Gift will be another step back in time for the 2003 world champion, who has run sub-10 seconds over 100m on four occasions.

Collins, who is the first Caribbean athlete to compete, said he hadn't raced on grass for "about 14 years".

The back marker has been watching YouTube footage of the 130-year old event to prepare himself for a charge at the $40,000 first prize.

"It's good to try something different for a change," he said.

"I'm very happy and excited to be back on grass where I started my early days of my career."

"It's going to be very interesting being the guy at the back trying to catch everybody but I'm looking forward to the challenge."

The international star, who has competed at four Olympics, says he's using the meet to continue his preparations for a tilt at the world championships in Korea in late August, which will be his eighth titles.

"The old legs still have a lot left in them.

"My body's not ready to give up just yet so while I can compete in the best shape I will do that.

"I'm not sure if I'm going to be at the world championships ...if I'm able to go and do good I will go."

Collins said he didn't know anything about his rivals, having just met Rouge-Serret.

The 23-year-old Victorian said it was a new challenge, having an athlete of the calibre of Collins behind him.

"It's going to push me all the way," said Rough-Serret, who believed 12.1 secs for the 120m race should be enough for a win.

The Australian title-holder has another threat with flamboyant 400m runner John Steffensen issuing a personal challenge.

"He seems to think he's going to beat me but I can't let that happen," he said.

"I think he's got just over four metres on me but I'm pretty confident I'll be able to chase him down."

Re: Kim Collins the backmarker for the Stawell Gift

PROTRACK » GENERAL » Kim Collins the backmarker for the Stawell Gift