Steffenson running in the Stawell Gift 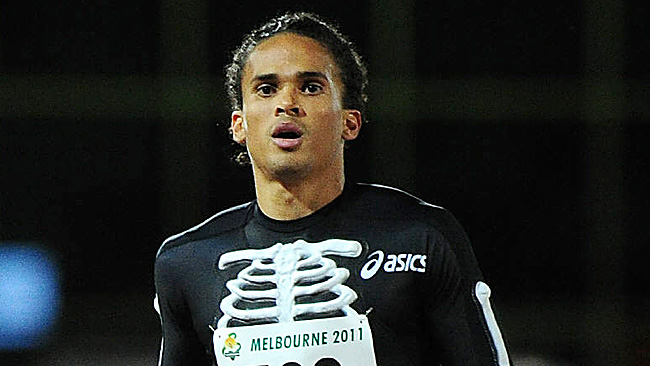 The 2006 Commonwealth champion was a late entry after being happy with his performances and his body in three gruelling rounds of the 400m at the Australian Championships in Melbourne.

Steffensen will join a number of stars, including 2003 world 100m champion Kim Collins, from St Kitts and Nevis, Victorian Aaron Rouge-Serret, who sharpened up for Stawell by taking the 100m-200m double at the Australian titles and Australian 400m hurdles champion Brendan Cole.

Steffensen was dubbed the Peoples Champion after capturing the nation's attention with a stunning 400m win at the Commonwealth Games in Melbourne in 2006.

He returned to the headlines last weekend when he lined up in the heats of the Australian Championships wearing a full length skeleton suit.

"I cant wait to come down there and give Stawell some of my flavour,'' Steffensen said.

"I've always wanted to run at Stawell and came close straight after the Commonwealth Games in 2006, but now the timing is right.

"The 120m is different, perhaps a little too short for me, but I'm going to get down there and try to put on a show for the fans.

"I watch Stawell on TV and it looks like a lot of fun. I think all Australian athletes have got to get down there and give it a go when they're in their prime.'

The heats of the Gift will be held on Saturday and the semis and final on Easter Tuesday.

The elite male sprinters add their name to a long list of Australian athletics stars who will make the trip up the highway to Stawell, joining Tamsyn Lewis who collected her 17th Australian title on the weekend after winning both the 400m and the 800m, Australian 400m hurdles champion Lauren Boden, and Australian 100m silver medallist Melissa Breen who will take on the men in the Gift.

And despite having to withdraw from the heats of the 1500m at the national titles as a precaution, distance star Craig Mottram is still expected to take on the African runners over the much-anticipated two mile event on Easter Tuesday.