Can Yohan Blake match it with Bolt? 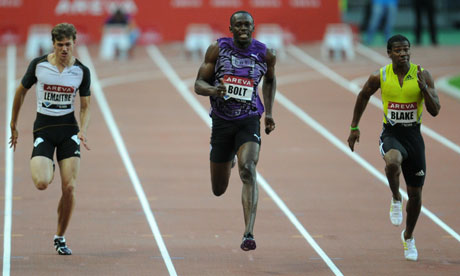 Christophe Lemaitre, Usain Bolt and Yohan Blake compete in the men's 100m in Paris in 2010.

Yohan Blake has run 100m in 9.80 seconds - can he and others challenge the Jamaican Olympic and world record holder?

Over the weekend a 21-year-old Jamaican sprinter ran the fastest season's opener since Usain Bolt stunned the world in his breakthrough year in 2008. That sprinter's name is Yohan Blake, and having run 9.80 seconds so early in the season he has announced himself as a serious contender in the 100m.

Blake's run at the Jamaica Invitational was big news on the island but elsewhere, outside of the dedicated athletics press, his achievement hardly got a mention. Thus far all the talk of a rival to Bolt's seemingly indomitable crown has tended to focus around two men: the American Tyson Gay and Asafa Powell of Jamaica, the second and third fastest men in history respectively.

But Blake's world leading time and new personal best should not be ignored. That run ranks him sixth on the all-time fastest list, ahead of a list of stars including Donovan Bailey, Justin Gatlin, Linford Christie, Carl Lewis, Ato Boldon and Frankie Fredericks.

In today's terms 9.80 secs ranks him the fifth fastest man competing on the circuit, just behind his compatriot Nesta Carter, another oft-ignored name, who ran 9.78 secs last year. What marks Blake out as different to the others is his age – just 21 years old. The only other youngster comparable is Ryan Bailey of the USA, who ran a best of 9.88secs last year. Over the 200m Blake has been similarly impressive, his personal best of 19.78secs posted in 2010 ranks him sixth in the fastest men competing today.

A training partner of Bolt's, Blake has so far received little attention in his own right. At a press conference ahead of the New York Diamond League meet last summer, the young Jamaican shared a stage with the Olympic silver medallist Richard Thompson of Trinidad & Tobago, and Antiguan sprinter Daniel Bailey, and was virtually ignored.

Thus far his only time in the spotlight came when he tested positive for the stimulant 4-Methyl-2-hexanamine along with four other Jamaican sprinters in 2009. The news filtered through the day that Blake ran at Crystal Palace. Journalists – struggling even to identify him - flocked to the mixed zone to catch a word. The then teenager looked like a rabbit in the headlights as he fled from the scene, while Bolt was left to answer questions about how it could be that a training partner of his had failed a drugs test.

The case itself was complex; the named stimulant was not actually on Wada's list of banned substances, but was deemed to have similar properties to the prohibited Tuaminoheptane, which acts as a decongestant to aid breathing. Blake and three others were eventually given three-month bans and withdrawn from competing at the world championships that year.

But before anyone dismisses Blake as another product of sprinting's dark love affair with the laboratory it is important to note his phenomenal performances as a junior. Jamaica's schoolboy record holder for the 100m, I first heard of Blake when I travelled to the island to watch the famous boys and girls high school championships, locally known as Champs, in March 2009.

There the buzz in the crowd was all about Blake, a young man who had graduated from the schools circuit and had just began training with Bolt in Kingston. Rumour was that Blake was regularly running under 10 seconds in training and was destined to be the next big thing. Could 2011 be his breakthrough season?

Bolt, 24, will no doubt lay down his own marker when the he makes his season debut in the 100m at the Rome Diamond League meet come the end of this month. There the triple world record holder will be joined by Powell, and Europe's own sprint champion Christophe Lemaitre. How fast that field runs will give us a better idea of just how good an opening run of 9.80secs looks in 2011, and ultimately just who is in contention for a share of the spoils come the world championships in South Korea this summer and the London 2012 Olympics.