BY PAUL A REID Observer Writer
Jamaican Observer
Sunday, May 22, 2011

JAMAICAN sprinter Steve Mullings continued to set the pace in the 100 metres this season after another fast time yesterday.

Mullings improved his personal best and world-leading mark to a brilliant 9.89 seconds in winning a race at the NTC Classic Track and Field meet at his training base, the National Training Center in Clermont, Florida.

Like a month ago when he set the pervious personal best 9.90 seconds in Starkville, Mississippi, the World Championships relay gold medallist was pushed by a maximum allowable win of 2.0 m/s as he beat American Travis Padgett, 9.99 seconds, and Northern Ireland's Paralympian Jason Smyth, who set a national record, 10.22 seconds, to finish third.

All three men are training partners with the Lance Brauman-led camp which trains at the NTC.

Meanwhile, defending world champion Brigitte Foster-Hylton ran a season's best 12.99 seconds in the 100m hurdles in only her second time in the event this season.

Foster-Hylton, who finished second in the event yesterday, had clocked 13.34 seconds to win at the Jamaica National Jamaica International Invitational earlier this month and led home another Jamaican, Andrea Bliss, who clocked a season's best 13.28 seconds just over 24 hours after returning from two races in Brazil. 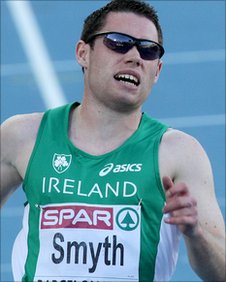 Jason Smyth bettered his own record
in the United States

Jason Smyth improved his own Northern Ireland 100m record as he came third in a world-class field at Saturday's NTC Classic meeting in Florida.

The Londonderry athlete clocked 10.22 which cut .10secs off the existing mark he set at last year's NI Championships.

Jamaican Steve Mullings took victory in a speedy 9.89 ahead of American Travis Padgett (9.99).

Smyth's time is a B standard for the London 2012 Olympics and this year's World Championships in South Korea.

Both Mullings and Padgett are part of Lance Brauman's training group which Smyth has been working with in Florida over the winter and spring.

Saturday's race took place at the National Training Center track in Clermont which is Smyth's Florida training base.

"Conditions were absolutely perfect. He had a (maximum permissible) 2 metres per second wind and the temperature was 95 degrees," Smyth's coach Stephen Maguire told BBC Sport.

"It's the perfect start to the season for Jason after the injury problems which he had at the end of last season."

Smyth was forced out of both the Commonwealth Games in October and World Paralympic Games in New Zealand in January by a back injury.

The double Beijing Paralympic champion ran a new NI record of 10.32 in June last year and a wind-assisted 10.27 a few weeks later but his build-up to the European Championships was then affected by injury.

The Derry man was unable to race for a six-week period before the Europeans.

The injury had to be carefully managed in order to make the start line in Barcelona, where he went on to reach the 100m semi-finals.

Smyth became the first ever Paralympic athlete * to compete at a European Championships and he aims to run at both the Olympics and Paralympics in London next year.

The 23-year-old plans to have a further outing in Florida next weekend and hopes to run in New York a week later.

*Jason Smyth is eligible for the Paralympics as he is a visually impaired athlete.