'U can't lie no more': Steffensen hits out at athletics boss on Twitter 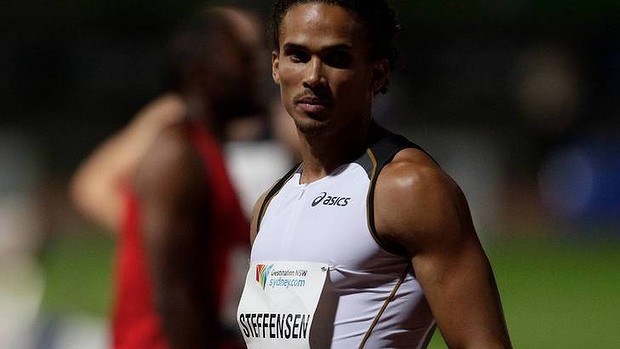 John Steffensen has heaped a further tirade of criticism on Athletics Australia chief executive Dallas O'Brien despite incurring criticism himself from Olympic chef de mission, Nick Green, who has made his disappointment in the outspoken sprinter clear since landing at the Games village in London.

Hoping for a late call-up to race the individual 400 metres at the Olympics after being named as a reserve for the event - seemingly against the wishes of O'Brien - Steffensen claimed that AA's high performance director Eric Hollingsworth has been gagged over the saga, and that O'Brien had lied about events that have left the window open for the dual Commonwealth Gold medallist to race instead of teenager Steve Solomon.

After national Olympic boss Green yesterday chastised Steffensen for his outspokeness around his non-selection for the individual race - Steffensen has raised racism as a factor - the sprinter launched another barrage of criticism against O'Brien on Twitter. His posts included:

"Dallas u can't lie no more!I have a paper trail for days!Save your self n start telling the truth!U can't hide behind bias media!

"I dare someone to interview me and Dallas our Ceo together!! He would nerver (sic.) do cause he knows would expose the lies!! Why they gag eric!!

"...it took me 8 Years to expose the injustice Dallas you made a promise to me this year and I kept quiet!Now u wanna lie in the paper"

After international press, including USAToday and EuroNews, picked up on saga but wrongly described Steffensen as Indigenous, the 30-year-old highlighted the error. Steffensen's heritage is South African.

A member of the 4x400 metre relay team that won silver at the Athens Olympics, Steffensen initially threatened to boycott the London Games over his non-selection in the individual event. Though Steffensen won the 400 metres at the Olympic trials early this year, Solomon has since been picked ahead of the 30-year-old after posting better times and winning back-to-back national titles.

Steffensen did not defend his Commonwealth Games crowns in Delhi two years ago, pulling out in another storm of controversy in which he accused Athletics Australia of being "egotistical and outdated". He was subsequently banned for three months for bringing the sport into disrepute.

OUTSPOKEN 400m runner John Steffensen has placed Australian athletics officials in an embarrassing position ahead of the London Games after it was confirmed yesterday he was still technically nominated to contest the one-lap individual event despite having accused officials of racism.

The Steffensen controversy has also revealed a split within Athletics Australia.

AA chief Dallas O'Brien yesterday declared Steffensen would not be selected for the 400m because of his form, even though high-performance manager Eric Hollingsworth has simultaneously been working with Australian Olympic Committee officials to keep the door open for him.

Australia can nominate only one athlete for the 400m but by nominating Steffensen as the reserve, with the better-performed Steve Solomon remaining the official nominee, Steffensen has technically been given another two weeks to show he can improve his time before the race.

Steffensen reacted strongly to the news he would not be nominated by attacking AA officials for being racist.

Speaking to Fox News yesterday from Europe, O'Brien said it was clear that, "Steve Solomon, our 19-year-old rising star, was the only entry (for the race) but the AOC have nominated him (Steffensen) as a reserve.

"So that does keep that open in case something happens to Solomon. But it is very clear at the moment that Steve is the first and only choice from Athletics Australia selectors.

"The reason that Steve was chosen by selectors was, over the last month he has run two PBs, he's running a second faster than John, and unfortunately John's injury at the Stawell Gift has slowed him up a bit. He hasn't quite got the form he had earlier this year."

Last night an AA spokeswoman said that both Hollingsworth and AOC official Fiona de Jong had checked the IAAF rules and confirmed that Australia could nominate a reserve for the race.

Steffensen said: "Luckily enough, Eric Hollingsworth spoke to the AOC and spoke to Fiona De Jong and she happened to luckily name me as a reserve against Athletics Australia's wishes.

"So I still have the opportunity like I wanted to. When I get to the village, Steve and I can train together, we can speak to Eric and let him make a decision (about who will race the 400m) closer to the time which I think is a lot more fair."

If he runs the Olympic A qualifying time up until 24 hours before the 400m race, Steffensen would be automatically selected to contest the event ahead of Solomon.

Speaking from London last night, the chef de mission of the Australian Olympic team, Nick Green, said he was "disappointed" by Steffensen's accusations of racism.

Steffensen, who was on the 4x400m relay team that won bronze in Athens in 2004, publicly threatened not to run in the relay if Solomon was selected in the individual event.

"I have been disappointed with his thoughts around this," Green said. "As far as we are concerned, Solomon is the runner."

O'Brien said Steffensen might come to regret his comments about threatening to boycott the relay "when things settle down".