From the AA Website:
Rounding out the green and gold charge in London overnight, Australia’s men’s Commonwealth Games 4x100m relay team stepped out for its 2010 European debut but ran into some bad luck midway through the race and did not cross the finish line.

Led off by New South Wales sprinter Jacob Groth, the team came unstuck at the second change as Matt Davies and Aaron Rouge-Serret lost contact with the baton, Rouge-Serret and Isaac Ntiamoah missing out on a run. England took out the event in 39.31.

Guest
Why wasn't Patrick Johnson in the team?

But where's Alozie? Is he still injured?

Guest
You can't say anyone is surprised, Aus 4X1 teams always drop the batton. Why bother sending them? 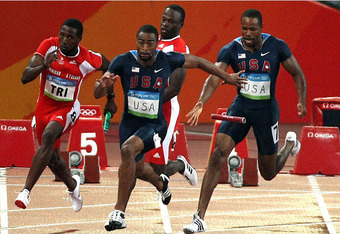 One of the most exciting events in any track meet is a sprint relay race.

It is one of the few opportunities to witness teamwork in a sport dominated by individual performance.

For decades, American track fans have been spoiled with multiple gold medal runs in the short relays (4x100m and 4x400m) on the world stage.

In recent years however, American relay teams have produced results which have been anything but exciting.

Many fans will remember the Olympic-sized failure of both the men and women's 4x100m relay teams to bring home a medal from Beijing, 2008—due to dropped batons.

And then, once again at Berlin's 2009 World Championships, astonishingly both teams were disqualified in the semifinals due to a dropped baton (women) and exchange zone violation (men).

On the world's biggest stages, the former kings and queens of speed have choked, while tiny Jamaica has been more than willing to step in and occupy that throne.

Bad baton exchanges have become a dilemma for American sprinters at the elite level. Perhaps as a carry-over from the days of dominance, a casual attitude toward the assembling of relay teams has resulted in poor chemistry and communication.

While raw speed is an important ingredient in any relay team, throwing the four fastest runners together does not necessarily make the best team. Some runners excel on the straight sections while others are more proficient on the turns. Some are good starters and others are better finishers.

The baton exchange itself is subject to various techniques and requires hours of practice.

The concept of a relay team composed of "specialists" is becoming more popular at the high levels of American track and field.

At this year's Penn Relays, two American men's teams actually got the baton around the track, albeit while finishing in the dust of the Jamaicans. Although the times were respectable, several of the exchanges were subpar.

This Thursday, at the Zurich Diamond League meet, the Americans get another shot at their Jamaican nemesis in a somewhat anti-climactic showdown. World/Olympic Champion and world record-holder Usain Bolt and former world record-holder Asafa Powell will not compete for Jamaica.

However, their stable of sprinters is very deep and talented. Mario Forsythe, Yohan Blake, Marvin Anderson, and possibly Nesta Carter will be available. As of this writing, USA will go with former World Champion and American record-holder Tyson Gay, Wallace Spearmon, Walter Dix, and Trell Kimmons.

Given recent history, regardless of order of finish, an effort by the Americans which results in the baton cleanly crossing the finish line will be viewed as a minor victory.

For sprint fans, two other USA vs. Jamaica matchups in Zurich will draw attention: In the women's 100-meters, two-time Olympic 200 meter champion Veronica Campbell-Brown of Jamaica will face down the second-fastest woman in history, American Carmelita Jeter. The two are 1-1 this season.

Jeter's compatriot, Marshevet Myers, rebounding from injury, will also be a factor.

In the men's 200-meters, Jamaica's best-kept secret, Johan Blake squares off with the only man to beat Tyson Gay this year, American Walter Dix.

A US quartet featuring Tyson Gay ran the fourth fastest time ever in the 4x100 metres relay at the Diamond League meeting on Thursday.

Trell Kimmons, who had earlier run 9.95 seconds in a 100m 'B' race, teamed up with Gay, newly-crowned Diamond League 200m champion Wallace Spearmon and Michael Rodgers to clock a world lead and meet record of 37.45sec.

"It was a lot of fun, one of the funniest moments of the season for me," beamed Gay, who had opted not to compete in the 200m.

"I'm happy we got the stick around, that was the most important thing," he said in reference to the US quartet being disqualified from the 2009 worlds in Berlin and dropping the baton at the Beijing Games.

Gay, pole sitter in the blue riband event of the 100m in the absence of injured Jamaican rival Usain Bolt, added: "My groin is okay, it felt good.

"I have the 100m in Brussels but possibly it will not be the last race of the season for me."

The 28-year-old Gay claimed a victory over Bolt in Stockholm earlier this month, the Jamaican world record holder's first since pre-Beijing Olympics in 2008.

Gay has targeted beating his personal best (and second fastest time ever) of 9.69sec set in Shanghai last year in the final Diamond League meet in Brussels next week.

But on the eve of this meet the triple world sprint champion from the 2007 Osaka worlds admitted that he needed a break from competition.

"At the end of the season, I need a vacation. I've never taken one," he said. "This will be the first time. Not sure where I am going to go, but it will be nice to just relax."

I gather this is probably good enough to get the nod to compete in New Dehli and fair enough as they deserve to go to a Comm Games. But in real terms it is still barely competitive against the major medal chances in Jamaica, England & Canada (if they all get the baton around).

In my view, the women's 4 x 100m with McLellan, Breen & Jody Henry, with maybe Laura Whaler would be a much better medal chance and it's a shame the selectors were not looking at the bigger picture when selecting the team and considering likely finalists.

Australia should be represented in all four relays at EVERY Comm Games if only to encourage sprinters to stay in the sport.
_________________
"Let's Go While We're Young"