On track for a place among sporting elite

The Australian track and field team was the first to arrive for the world championship in Korea and is aiming for five medals, writes David Sygall.

Australia will field its strongest world championships team in South Korea and there will be no excuses for sub-par performances, after special arrangements were made to ensure the athletes had the best possible preparation.

Athletics Australia high performance manager Eric Hollingsworth called in some favours to make sure the Australians were the first of the 178 teams to arrive for the event, which begins on August 27. It gives them a fortnight to acclimatise to the hot conditions and stay in the athletes' village next to the track. Australian officials expect five medals - and six at next year's London Olympics - led by sprinter Sally Pearson and long jumper Mitchell Watt.This would place Australia among the world athletics elite a year out from the Games.

''If we got five medals we'd be about the seventh strongest nation in the world in track and field,'' Hollingsworth said from Daegu.

Advertisement: Story continues below ''Our sights are pretty high, but we were 10th in Berlin [the 2009 World Championships], which was a great performance, and we believe this team is better. You're going to have Russia and USA ahead of us and maybe Kenya, Jamaica, Ethiopia and then it's a fight between France, Germany, Great Britain, ourselves and a couple of others. We're really in high company. We just need to realise that potential now.

''On paper there's no question that this is the strongest Australian athletics team we've ever sent to a world championships. The multitude of world champions, world's best form and Australian record holders is pretty phenomenal. They've got to realise that expectation.''

Athletics great Raelene Boyle said Australian track and field was ''on a high'', an assertion that gains perspective when one considers the competition. ''It's a much more difficult sport to be successful in than, say, swimming. We have the African nations to compete against and many of those competitors are out to achieve a lifestyle for themselves.''

Boyle suggested 5000 metres runner Craig Mottram as a prime example. Mottram, the bronze medallist in the 5000m at the 2005 World Championships - who Ron Clarke dubbed Australia's greatest ever distance runner - is rated a distant chance of troubling the frontrunners.

''His event is so difficult, when you talk about the wonderful African runners, you realise that his task is one of the biggest tasks in all athletics,'' Boyle said. ''Our men and women really have a big task ahead of them. But I think that with Dani [Samuels], the jumpers, Steve [Hooker] - there's Alana Boyd in the pole vault too, who won the Commonwealth Games gold - and various others who are coming through, things are looking good. They might not all win medals. But just to make the finals in this sport is a great achievement. They deserve more attention for that. Top 16 is good, top eight is fantastic and to medal in track and field is out of this world.''

It was originally thought that the team would stay in hotel accommodation. But cultural differences, according to Hollingsworth, made staying at the athletes' village a better option. ''It's better for us to have our camp in the athletes' compound,'' he said. ''Korea is culturally very different. For instance, some of the hotels couldn't provide facilities the females in the team would use in their recovery, so we're in the village, right next to the track and all the facilities.''

Hollingsworth said the two hottest favourites were Pearson and Watt, as well as Samuels and Hooker.

''We also have four excellent walkers in Nathan Deakes who's coming back from injury, Jared Tallent who's a double Olympic medallist from Beijing, as well as Luke Adams and Adam Rutter,'' he said.

Hollingsworth said that unless a competitor finished in the top eight in their event at the world championships, they were unlikely to medal in the Olympics. 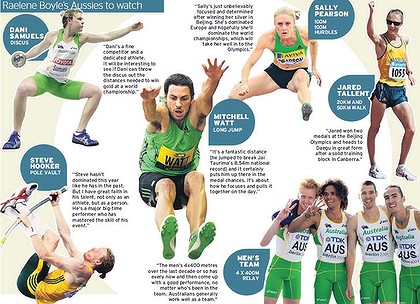