Queensland Fire speedster surprises with her pace on the track 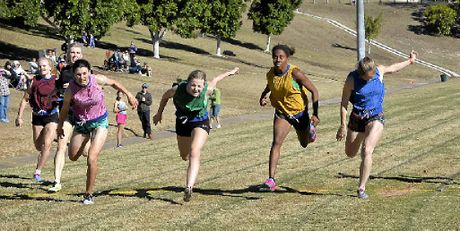 However, one surprised winner highlighted the quality field of allrounders being attracted to the handicap style of racing.

Queensland Fire cricketer Courtney Hill snuck under the proverbial radar to win the 100m Ladies Gift at her first attempt.

"It was a little bit foreign but I really enjoyed it," said Hill, 26.

"I had no idea what was to come. I had no expectations."

"I told Mel I was coming to her stomping ground," Hill smiled, delighted to have won the final in the blustery conditions.

"I showed a little bit of nerves at cricket and I was really grateful Mel was always on the drive with me.

"I spoke to your local girl this morning and I was singing with her in my head before I did the race."

The pre-game cricket strategy seemed to help the aspiring athlete.

"Athletics training comes second," Hill said, preparing for a new season of cricket, starting with trial games next month and the national league in October.

"It's a bit unfortunate that both seasons go at once but I try to fit in what I can."

"It's fast. It's over and done with really quick," she said.

"For someone like me, it's good because you can't think too much. Get in and go hard."

Taylor was fifth with Amiss seventh.

One of the toughest jobs at Sunday's annual carnival was being a photo finish judge, with so many exciting sprints.