Shirvo: It's not a skin thing
By DAVID SYGALL
Sydney Morning Herald
August 8, 2010

CHRISTOPHE LEMAITRE is 20 years old and has registered a faster time for the 100 metres than Asafa Powell and Tyson Gay at the same age. Not bad for a sprinter with only five years' experience.

But when Lemaitre won at the French championships recently, his time of 9.98 seconds was not the only factor that commanded attention. The other was his skin colour. White men don't run that fast. Never have.

To question why black men run faster than white men is sensitive territory. Some argue the discussion is immediately flawed because parceling people into racial groups has no scientific basis. It's pseudo-science. Others could twist the analysis to divide or stereotype. Rather, some might say, socio-economic, historical and cultural factors are the true determinants of success.

Lemaitre hates the title of world's fastest white man. It places him in a precarious position in a country struggling with racial tension. It also ignores the way elite athletes think.

"Talking about white sprinters, I find this absurd," he told Le Monde. "This story is too much, I don't like it. I had a good race, I broke the [national] record but there is not much more to say."

Australian sprinter Matt Shirvington empathises with Lemaitre. After clocking 10.03s as a 19-year-old in 1998, he awoke to the headline "Great White Hope".

"I remember feeling very embarrassed about that article," Shirvington said. "I remember thinking I'd rather be the fifth fastest man in the world regardless of my skin colour than the fastest white man. I wanted to be the fastest of all. I didn't want to be restricted. Wearing that title only puts a ceiling on you.

"Christophe would much rather be winning races than worrying about whether he's the fastest white man. It's an irrelevant title for someone who wants to be the fastest sprinter in the world. It's a tag that I don't think is relevant for this day and age."

Lemaitre's rise would confound those quoted in Sports Illustrated's extensive 1971 article "An Assessment of 'Black is Best"' which concluded that African-Americans had advantages, including longer legs, thicker thigh muscles, less body fat and a higher percentage of fast twitch fibres. The article would be decried today but some scientists remain fascinated by the question. Last month a study by Duke University's Adrian Bejan and Howard University's Edward Jones (who is African-American) concluded that the disparity between blacks and whites in swimming and sprinting could be explained by black people having a higher centre of gravity.

“They are not competing on level playing fields,” Bejan told London's Daily Telegraph on Thursday, adding: "It's a physics paper, not an opinion paper. I urge other people to read what I've written and then safeguard against attempts to misuse it."

Shirvington was never interested in such science. "People tried to put forward these arguments when I was competing," he said. But, really, the guy that "And I do believe that our sedentary western lifestyle has caused us to have certain physical aspects that aren't conducive to elite level performance.does well is the one who's most confident and has worked the hardest. It doesn't matter what your background, race or creed. For that matter, there was a Japanese guy who ran 10-flat [Koji Ito in 1998]. So you need to look at all aspects of sprinting, the culture behind it and the background of the competitors to get the full picture."

Body shape, not skin colour, is what Shirvington finds most interesting about Lemaitre. His lean and lengthy physique is similar to Usain Bolt's and, though he doesn't have a powerful start, he's able to accelerate like Carl Lewis or Donovan Bailey did. That, combined with internal competition, is the key to Lemaitre's emergence.

"The French have a number of good sprinters now and that's lifting the entire group," Shirvington said. "I went through a similar thing, with Damien Marsh. I looked up to him and then took it to the next level. Then Patrick Johnson and I had a great rivalry that inspired all Australian sprinters. The French are going through that now.

"Lemaitre has taken it to the next level. He'd be focused on moving forward now, not whether he's the fastest white man around." 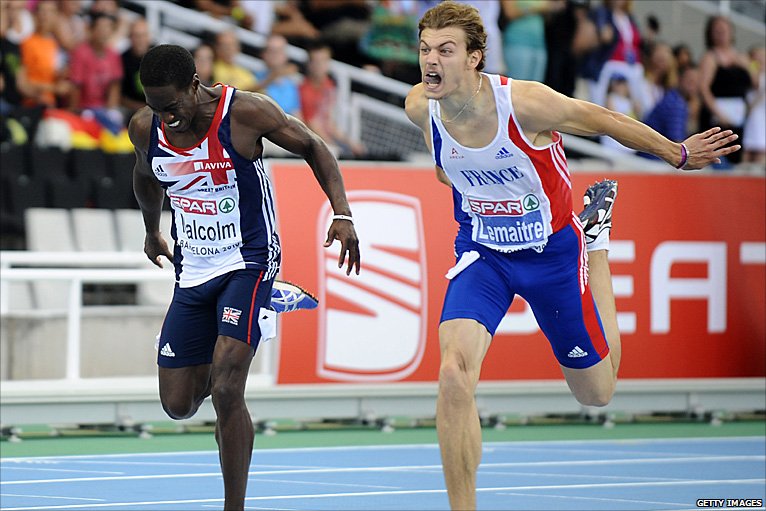 Guest
Its not that big a deal really, wont get him much more money and he still has to race the negros. Wariner showed that white guys could sprint anyway, and then looking at the 400m field for london diamond league 5 of the 8 are white