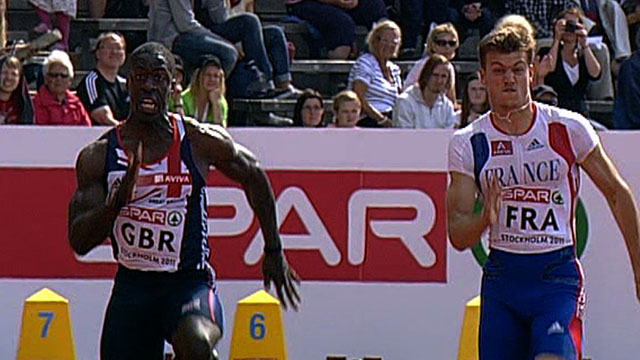 Christophe Lemaitre beat Britain's Dwain Chambers as he stormed to victory in the 100m at the European Team Championships in a personal best time.

The Frenchman clocked a blistering 9.95 seconds in the showpiece event on the first day of competition in Stockholm.

Chambers, 33, also pocketed 11 points with a commendable time of 10.07 but he never looked like overhauling 21-year-old Lemaitre, who improved his own French record by one-hundreth of a second.

"He is fantastic for European sprinting," said Chambers. "He has so many advantages with his height and those long legs that keep striding past me...he is like an antelope!"

"He is young and enthusiastic, but at my age [33], I just have to keep chasing him and focus on my own race."

Lemaitre, whose time was a championship record and the fastest by a European since 2004, added: "I am very happy and very surprised - I didn't think I would beat my personal best again.

"But I think I can run faster in Daegu [at the World Championships in August]. Of course it is very difficult with Usain [Bolt], Tyson Gay and Asafa Powell, but I think I can get to the final in the 100m and 200m, and hopefully be going for fourth or fifth place."

Britain's men's 100m relay team rounded off the day's action with an impressive victory in a time of 38.60.